This letter, by Kerry for Choice member Paul WS Bowler, first appeared in the Irish Examiner on the 2nd November 2017 and in The Irish TImes on the 3rd November 2017 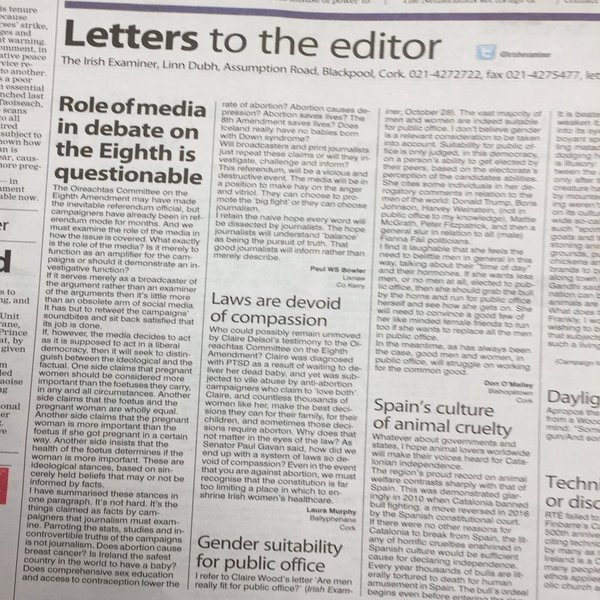 The Oireachtas Committee on the Eighth Amendment may have made the inevitable referendum official, but campaigners have already been in referendum mode for months.

If it serves merely as a broadcaster of the argument rather than an examiner of the arguments then it’s little more than an obsolete arm of social media. It has but to retweet the campaigns’ soundbites and sit back satisfied that its job is done.

I have summarised these stances in one paragraph. It’s not hard. It’s the things claimed as facts by campaigners that journalism must examine. Parroting the stats, studies and incontrovertible truths of the campaigns is not journalism. Does abortion cause breast cancer? Is Ireland the safest country in the world to have a baby? Does comprehensive sex education and access to contraception lower the rate of abortion? Abortion causes depression? Abortion saves lives? The 8th Amendment saves lives? Does Iceland really have no babies born with Down syndrome?

Will broadcasters and print journalists just repeat these claims or will they investigate, challenge and inform?

This referendum, will be a vicious and destructive event. The media will be in a position to make hay on the anger and vitriol. They can choose to promote the ‘big fight’ or they can choose journalism.