This press statement was issued on the 2nd March 2017 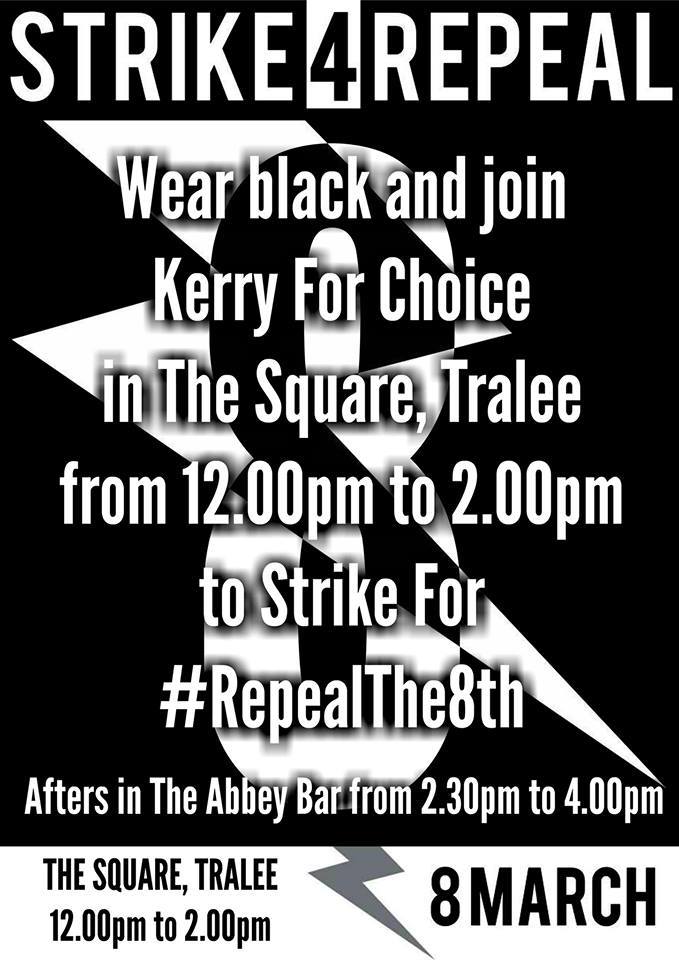 Kerry for Choice will be taking part in the Strike for Repeal on the 8th of March, International Women’s Day, with a stall in the Square Tralee offering information on why we need to repeal the Eighth at 12-2pm. The stall will be followed by an informal gathering at The Abbey Inn from 2.30-4pm for an opportunity to meet fellow campaigners and discuss ways to bring about full reproductive rights to women in Ireland in line with the UN Human Rights Committee recommendations.

The Strike for Repeal is taking place country wide, in the U.K and New York​. ​The Strike has been called in response to our Government’s continual stalling on the issue of a referendum. Women can no longer wait.

We understand that many people are unable to take time off work due to financial restrictions so we are asking people to show their support by wearing black on the day and to come to the stall during their lunch time.

Convener of Kerry for Choice, Paula Dennan, said: “56 Kerry women were forced to travel to England and Wales in 2015 to access abortion services. We don’t know how many Kerry women are taking abortion pills at home, afraid to seek medical advice and support, afraid of being prosecuted because their country does not afford them the same rights as the majority of their European sisters to safely end a crisis pregnancy.

It is time we take a stand for our Kerry women and show our support for their right to decide what happens to their bodies and their right to access abortion services in Ireland.”

Tweets by KerryForChoice
A letter from one of our members, in this week's e

Today is Trans Day of Visibility. We stand in soli

There are only six days left to complete the Abort

"The lack of access in rural Ireland compounds the