This letter, by Kerry for Choice member Paul WS Bowler, first appeared in the Sunday Independent on the 8th October 2017 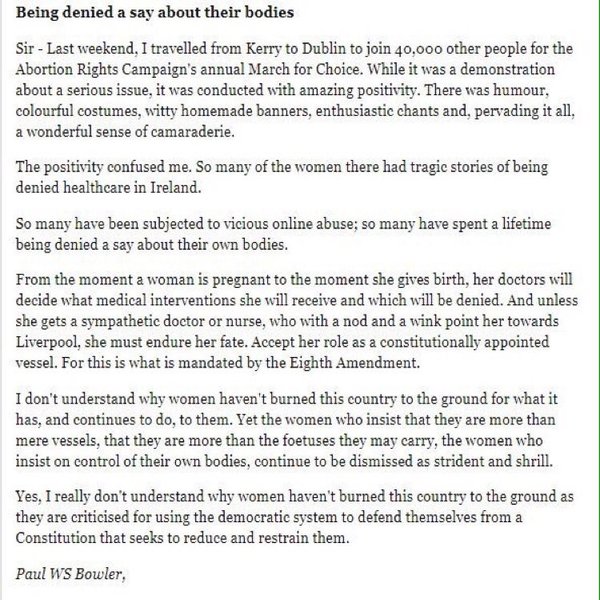 Last weekend, I travelled from Kerry to Dublin to join 40,000 other people for the Abortion Rights Campaign’s annual March for Choice. While it was a demonstration about a serious issue, it was conducted with amazing positivity. There was humour, colourful costumes, witty homemade banners, enthusiastic chants and, pervading it all, a wonderful sense of camaraderie.

The positivity confused me. So many of the women there had tragic stories of being denied healthcare in Ireland.

So many have been subjected to  vicious online abuse; so many have spent a lifetime being denied a say about their own bodies.

From the moment a woman is pregnant to the moment she gives birth, her doctors will decide what medical interventions she will receive and which will be denied. And unless she gets a sympathetic doctor or nurse, with a nod and a wink point her towards Liverpool, she must endure her fate. Accept her role as a constitutionally appointed vessel. For this is what is mandated by the Eighth Amendment.

Yes, I really don’t understand why women haven’t burned this country to the ground as they are criticised for using the democratic system to defend themselves from a Constitution that seeks to reduce and restrain them.